On July 9 I was up on a soapbox, talking about my science to unsuspecting shoppers in the Milton Keynes Centre.  I took part in Soapbox Science, an initiative of Drs Seirian Sumner and Nathalie Pettorelli, which brings science to the public and increases the visibility of women in science.  First run on Southbank in London, 2016 was its 6th year, with events in 13 locations in the UK and one event in Brisbane (Australia).

It was such a buzz – I was talking about ingenious plant strategies.  Each speaker has an hour on their soapbox, four people speak at once, and the audience come and go.  The people who stopped to listen were diverse, from parents with children in strollers, to teenagers to older couples.  Some just stayed a few minutes, others for almost the whole hour!  I loved seeing the looks of concentration, interest, thoughtfulness, surprise and awe on the faces of the audience.

I made people laugh out loud at how ingenious plants are, and hearing ‘Sorry!  We want to  listen longer, but our parking has run out, when are you back?’, was a big compliment.

At the inaugural Milton Keynes event there were 12 the speakers, including post-doc Claire Batty, PhD student Vibha Srivastava, also from The Open University, and researchers from Cranfield University, Universities of Buckingham, Leicester and Northampton as well as Rothamstead Research.  The topics were diverse, including 3D printing on the moon, using scent to detect disease, controlling crop weeds and the psychology of insight. Founder Nathalie Pettorelli (who I got to know when she gave a seminar at the OU), was right when she told me that being part of Soapbox Science has benefits beyond the event.  As a relatively new recruit to science in the UK, it was great to build my network, starting with the amazing MK event organising committee from Cranfield University (researchers Jack Hannam, Matthew Partridge, Diogo Gomes and Clare Humphries), and all of the other participants. It has already facilitated a collaborative project!

This video made by Robyn Bateman, shows what The Open University presenters talked about on our soapboxes! (hover the mouse/cursor over each person to watch their video) 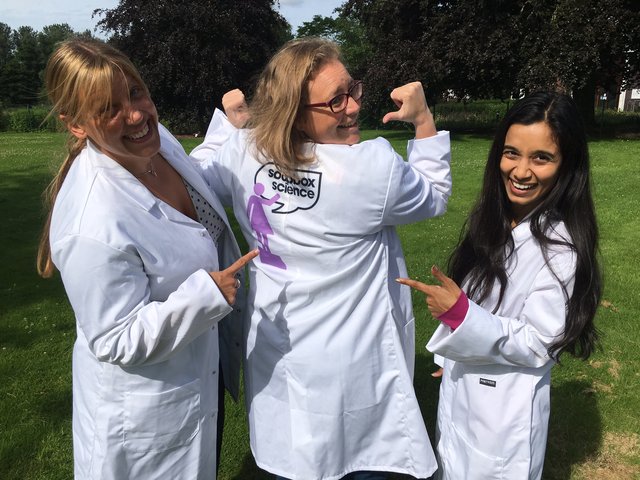