Last weekend I spent a wonderful five days in Laurieton and Kendall on the mid north coast of New South Wales for the 2013 Watermark Biennial Muster.  The Watemark Literary Society began in 2003 with the aim of bringing together Australian and international writers who write about nature and place.  Ten years later, I was delighted to be part of the 2013 event with the theme of ‘Nature and Childhood’.

It was such a wonderful experience, from chatting to the apparently endless stream of volunteers of who drove me to all of my appointments, to speaking on panels at the Muster, to listening Professor Richard Kingsford speak at the Watermark Dinner to, my favourite, visiting two schools.  I visited Camden Haven High School, and North Haven Primary School.  I was so impressed with the students I met, their teachers and the schools.  I talked to the students about climate change research using cranes at EucFACE, being a scientist and being a writer and about how My Little World developed from a English assignment into a published book.

I spoke on two panels ‘What is Childhood’ with Bruce Pascoe and James Woodford and ‘I spy with my little eye’ again with James.  I most enjoyed telling natural histories about leaves, bark, bugs and more in the outdoor session.  The Muster was an interesting contrast to my normal scientific life, with fascinating discussions about literature, writing, reading and ways of looking at the natural world.

During the Muster I shared a house with illustrator/animator David Hardy, poet Pat White, artist Catherine Day, educator and photographer David Eastburn and his wife Bernadette, and poet Harry Laing (after he abandoned his tent).  Despite being (nearly) complete strangers, were all got along famously and enjoyed many long conversations.  I made good friends.

I was invited to the Muster because of my children’s picture book My Little World, which has strong natural history themes, but also because of links with the Muster’s 2013 Artist in Residence: David Eastuburn.  For many years David ran the Special Forever program in the Murray Darling Basin.  My poem ‘My Special Place’, was published in the 1992 anthology when I was 11.  To see my work in a book at that age had a big impact on me and the Muster was a great chance to see the extent and history of the marvellous project that provided the opportunity.

I learned a lot from being part of the Muster and hope I made a useful contribution.  Many thanks to Elaine van Kempen and the other organisers! 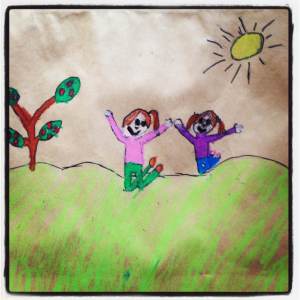 The very happy, original drawing on my bag of goodies and information.

The view from Little Brother over Laurieton 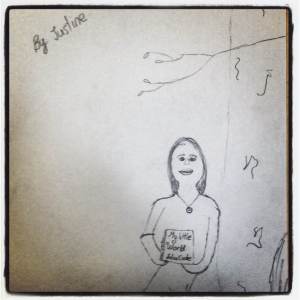 A drawing one of the students did of me with My Little World, and a scribbly gum