I am a plant functional ecologist, interested in the different roles species play in ecosystems. I use plant trait analysis as a powerful tool to compare the functions of different species and describe ecological strategies. I am particularly interested in plant silicon.

In brief, my interests are:

In 2015 I joined the School of Environment, Earth and Ecosystem Sciences at The Open University, UK as a Lecturer in Ecology and was promoted to Senior Lecturer in 2019.

Burning, grazing and rainfall treatments in the Flinders Ranges 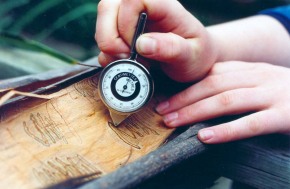 Before that I was a post-doc with Prof. Angela Moles and her Big Ecology Lab at the University of New South Wales.   Using a huge dataset, I am testing hypotheses for the distribution of simple vs compound leaves, and how plant trait variation relates to habitat variation.  Working with Yr 7 science students at Kambala we tested how to increase Christmas tree longevity (Akres et al. 2016).

Previously I was a post-doc with Prof. David Ellsworth at the Hawkesbury Institute for the Environment at the University of Western Sydney.  I examined the effects of elevated CO2 on photosynthesis in trees and grasses at the EucFACE facility, and explored and evaluated determinants of stomatal conductance in forest systems. We also used low oxygen conditions to explore phosphorus recycling in leaves (Ellsworth et al, 2015). In my first post-doc, with Dr Ian Wright, we examined changes in relationships between leaf traits, biomass allocation and growth rates with ontogeny in savannah ecosystems.  Prof. Mark Westoby and a team of post-docs, including me, collected an unprecedented dataset to test for predictors of growth rates in large plants.

My other main research interest is invasive plants and understanding the factors that contribute to a successful invasion.  In my Honours research I tracked the invasion history (Cooke et al, 2011) and studied the population dynamics (Cooke et al, 2012, ESA Prize winner) of Carrichtera annua (Wards weed, Brassicaceae) a weed of the southern rangelands of Australia, with a view to developing better control methods. From 2004-6 I worked with Prof. Michelle Leishman investigating leaf carbon strategies of invasive species in their native and exotic ranges (Leishman, Cooke and Richardson, 2014), reproductive output of native vs invasive species (Mason, Cooke et al. 2008) and the impacts of ecosystem diversity, propagule pressure and nutrient addition on invasion success (Leishman et al, 2010, Kyle et al, 2008) .

I have worked on a couple of other interesting projects.  At high school I measured the scribbles on three Eucalypt species as a record of the larval behaviour of Ogmograptis moths and demonstrated that there were likely more that the single species described at the time, most likely a different species of moth on each host tree species (Cooke and Edwards, 2007).  In 2005 I recorded an interaction between a frog and the lawny pitcher plant (Cooke, 2010), and  in 2014 together with a group of colleagues we investigated thousands of algal balls that unexpectedly washed up on a Sydney beach (Cooke et al. 2015).